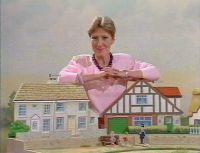 A maths series for infants in their first year of school. Lesley Judd introduces stories about two children called Kate and Ben and their everyday adventures in a small village. The stories lead to mathematical problem solving which Lesley follows-up in the studio with activities and games, using a large model of the village with wooden models of all the characters. There are also songs based on each story.

Some of the other characters in Kate and Ben's village include Mr Dunn the farmer, Mr Price the policeman, Mr Wilson the market stall-holder and Miss Roberts the school teacher. At the start of the spring term Mrs Mendis moves into the village to look after the Post Office, and her children Beena and Gopal make friends with Kate and Ben. Another well-known resident of the village is Greedy the goat, from Mr Dunn's farm.

The programmes are very similar to the earlier series Let's Go Maths, also presented by Lesley Judd and based around a model community.

Maths is Fun had sung opening and closing theme tunes, with words and music by Derek Hilton[1]. The theme song began:

The 1990 episodes were produced by Television Techniques Ltd for Granada Television.

Each of the Kate and Ben stories was told in a small children's reading book, with the full text of the story on the left pages for adults to read, and illustrations with simple captions on the right pages for children. 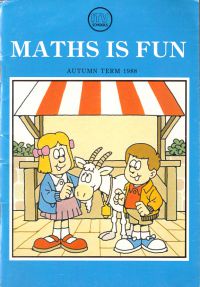 A booklet of notes for teachers, covering one school term at a time. The notes included background to the series and, in later editions, links to National Curriculum attainment targets, as well as notes on the content of each episode, suggestions for follow-up work, music and lyrics to all of the songs, and photocopiable balck-and-white illustrations for children to colour in.

The notes were written by the series advisers: for the autumn and spring terms Des Wilson, primary lecturer from the Maths Education Centre at Sheffield City Polytechnic; and for the summer term David Jones, co-author of Sprint Start and Number Counts teaching booklets, and Lesley Handford, a primary headteacher. 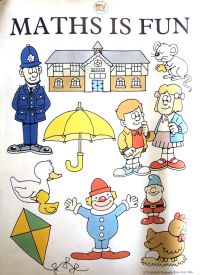 A set of full-colour A4 sheets to be hung on the classroom wall. 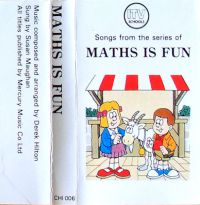 A mono audio cassette containing the opening and closing theme music and all of the songs from the series was published in 1988 to accompany the autumn and spring term programmes. It was produced by Mercury Music Company for Granada Television, catalogue number CHI 006.

A second cassette was published in 1990 to accompany the summer term programmes.