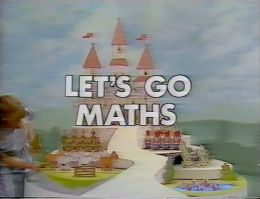 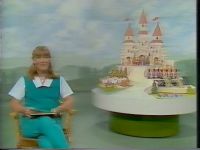 A maths series for children in their first year of school, based on stories about a prince and princess who live in a castle far away, and their adventures with the king and queen, their pets and the castle staff. The stories are told by Lesley Judd with the help of a large model castle in the studio, with wooden models of all the characters.

As well as the stories themselves each episode includes an activity based on the story, such as matching three caves to three dragons or arranging six horses in different ways. There is also a song an animation for each number from one to ten, with animation. Each term ran through the numbers one to ten, so each song was shown twice throughout the series.

After four years of Let's Go Maths the series was replaced by a similar programme also presented by Lesley Judd called Maths is Fun, this time telling stories about a normal boy and girl who live in a small village.

In the first year of broadcasts the series was shown during the spring term (10 weeks) and summer term (8 weeks), so there was only time to show the first 18 episodes. Episodes 19 & 20 were first shown in the next academic year when the series was broadcast in the autumn term and spring term (both 10 weeks).

Nevertheless the 1984-85 teacher's notes to the series included descriptions of episodes 19 and 20 with a note that the episodes would not be broadcast until spring 1986, so that teachers who bought the notes in the first year could re-use them next year without missing out on details of the final 2 episodes.

The Let's Go Maths theme song had six verses altogether, and several of them were sung at the start of each episode. The final verse was always:

To visit this palace,
We don’t have to go,
Through woods or along rocky paths.

There's a much quicker way,
We just have to say
"Let's… Go… Maths!"

There were also two special verses for the closing theme.

The theme song was written by Barry Hill, with music by Derek Hilton[1].

Each of the stories was told in a small children's book, with the full text for adults to read on the left pages, and illustrations with simple captions for children to read on the right. 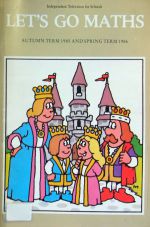 A booklet of notes covering the entire school year, with background to the series, descrpitions of the story and activity in each episode plus words and music for all of the songs and suggestions for follow-up work.

The notes were written by the series adviser Des Wilson, principal lecturer from the Maths Education Centre at Sheffield City Polytechnic. 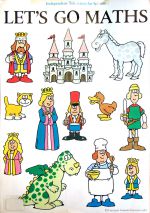 All ten number songs from the series, plus the full opening and closing theme songs, were available on an audio cassette

The cassette was produced by Mercury Music Company for Granada Television, catalogue number CHI 002. By 1987 it cost £2.85, including 37p VAT.

Share
Retrieved from "http://www.broadcastforschools.co.uk/mediawiki/index.php?title=Let%27s_Go_Maths&oldid=47845"
Categories:
Cookies help this website deliver its services. By using these services, you agree to the use of cookies.
History
Browse propertiesCite this pagePage informationPermanent linkPrintable versionSpecial pagesRelated changesWhat links hereRecent changes