The domestic adventures of a Doctor and his family living in a small French town were the subject of the first French-language drama series on British television, designed for pupils in their second year of learning the language in need of a new stimulus.

Docteur and Madame Dupré live with their daughter Nicole, who is in her final years of school, and their 20-year-old nephew François who is also a student. Madame Dupré's father - Nicole & François' grand-père - also pays frequent visits and other residents of the town, especially the friendly postman, also make frequent appearances.

The series was warmly welcomed by French teachers and by all accounts very successful[1]. Its appeal was in providing viewers the experience of hearing real, idiomatic French spoken (quite slowly) in perfect accents by French actors, matched with pictures to help pick up vocabulary so that, for example, when grand-père first comes to vist and Mme Dupré bids him to "mets-toi dans ce fauteuil" viewers see him sitting down in an armchair and understand the new vocabulary. The dialogue was constructed so that there was plenty of repetition of words and phrases, within each episode and from episode to episode, to reinforce vocabulary[2].

Several of the first term's programmes included French songs such as Auprès de Ma Blonde and Le Joli Tambour alongside the drama, but these were not judged to be a success and were not continued in subsequent terms[3].

When Chez les Dupré returned for a second year in 1961-2 it was without Marie France as Nicole Dupré. The TV Times chivalrously explained that "pretty daughter Nicole (Marie France) has, alas, gone to England to study English. But, as a compensation, M. Arnaux, the bookseller, has a beautiful daughter himself. Danielle is her name and she is played by Bettine Le Beau."[4] The Duprés also moved house in the first of the autumn term 1961 programmes and there were some changes to the production personnel.

The first programme in the spring term 1962 involved Dr and Mme Dupré getting out their holiday snapshots and talking about all of the places that they had visited. The entire term's programmes then featured various different excuses to show documentary-style films about different areas of France. One of the episodes (La Tournée du Facteur) was originally produced for the schools TV service of the RTF in France, but with a commentary specially adapted, by the French producers, for a British audience.

This documentary approach had already been attempted in the programme's first year, as the episode Souvenirs de Vacances included film sequences of the Dordogne valley as François recounts his holiday there.

Before Chez les Dupré all of ITV's schools broadcasts had been at least 25 minutes long, but this series for relative beginners in French was cut down to 12 minutes a week to make it easily digestible for children and the "starting-point for a great deal of conversational French in the classroom" in the rest of the school lesson[5]. 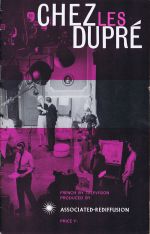 The Chez les Dupré schools programmes were also shown, unchanged, in peak hours on ITV (in the London region only) for general adult viewers hoping to improve their French skills.

Beginning on 29th December 1960 nine of the episodes from the autumn term 1960 - excluding the Christmas episode Veille de Noël and with some episodes shown in a different order - were screened on Thursday evening at 6:45pm by Associated-Rediffusion. The programme proved popular with viewers and 45,000 copies of the accompanying booklet were sold[6].

Associated-Rediffusion extended the evening run with a "second series"[7] following immediately in the Thursday evening slot from 2nd March 1961 onwards, consisiting of all 8 episodes from the spring term 1961 schools run and the first 4 episodes from the summer term. In fact those four summer term episodes were broadcast in the evenings in the same week as their initial schools transmission. The same episodes were broadcast at 3:08pm on Thursday afternoons for schoolchildren, and then again at 6:45pm in the evening for adults. The evening broadcasts did not continue when the schools broadcasts took a two-week break for the Whitsun holidays and ITV's horse racing coverage, and so the evening run concluded after 21 episodes.

It is perhaps notable that when the first 23 episodes of the series were screened by the ABC in Australia the following year they were similarly shown for both schools and general audiences: in Victoria at least the programmes were shown on Fridays at 2:50pm for schools starting on 16th March 1962, and then on Sundays at 2:15pm for adults starting on 27th May 1962[8]. 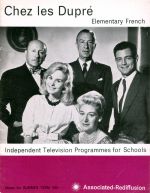 There was a booklet of teacher's notes available to accompany each term's broadcasts, with descriptions of each episode in French, vocabulary lists and suggestions for follow-up exercises. In fact for the spring term 1962 there were two separate booklets covering programmes 1-6 and 7-10, presumably because information about the final four episodes was not available in time for the first booklet's publication.

Separate booklets, with largely the same content, were published to accompany the evening transmissions of the series for adults.

Full scripts of the episodes were also available for sale to schools, which they could put to use if pupils were asked to re-enact scenes from the episodes.

The Linguaphone Institute also issued a learning package based on Chez les Dupré, "the popular Associated Rediffusion French Language Television series". This comprised a set of records with the soundtrack of the television programmes - I believe it is the actual TV soundtrack as it includes snippets of the theme tune when the episode title is announced, and the text has not been edited at all to remove references to pictures shown on TV such as "regardez notre mairie". There was also a booklet containing the complete scripts of the episodes and a complete translation of these scripts into English to help independent home learners who would not have the aid of a teacher - the English translations were never made available to schools.

Share
Retrieved from "http://www.broadcastforschools.co.uk/mediawiki/index.php?title=Chez_les_Dupre&oldid=46852"
Categories:
Cookies help this website deliver its services. By using these services, you agree to the use of cookies.
History
Browse propertiesCite this pagePage informationPermanent linkPrintable versionSpecial pagesRelated changesWhat links hereRecent changes